When rodeo bronc rider Jackson Walker’s father passes away, he’s shocked to find he’s not the only son of Dusty Walker. His dad had three other families at compass points around the country. When a stipulation in Dusty’s will requires him to live in his dad’s house and work at his company for one week, Jackson heads to Red Creek, Kansas to get it over with, so he can get the hell back to his regularly scheduled life.

Computer engineer Rori Hughes needs to solidify her position in Dusty’s company, but the only one of his four sons available is Jackson, and Rori has a mighty low opinion of rodeo cowboys. Finding inconsistencies in the computer files, Rori and Jackson work together to solve the mystery, but their constant contact fires a red-hot desire that burns wild between them.

Spending their days at Dusty’s opulent lakeside home, and their nights together making love, they both ignore the warning signs that point to their attraction becoming more than merely sexual. Jackson’s time in Red Creek is coming to an end, but can he follow his original plan and leave town, breaking away from smart, beautiful, sexy Rori?

Jackson sat in his dad’s chair and opened the top file. West Virginia coal and gas plant production specification codes… The words didn’t even register as English. “Hell.” Jackson didn’t have enough fuel in him yet for this tedious shit. He stood, hiked up his jeans, and walked back down the hall to the small kitchen. Pouring a cup, he spotted a black ringed-binder on top of the refrigerator.

He pulled down the book and flipped it open. The first page had a newspaper article about Dusty Walker’s first day as owner of the newly re-incorporated company he and his wife had inherited from his father-in-law. “Huh.” So Dad had changed the company name. And his wife owned half, which probably explained why Dusty had stayed with her, the greedy asshole.

Jackson felt the heat of anger surface again, and shook his head. The guy was gone. Wasn’t it time to shove past this pissed-off phase and move on to…moving on?

He scanned through dozens of pages of news articles, the first half from actual newspapers, the later ones printed from online sites, all of them chronicling the rapid growth of the company under his father’s leadership. He had to admit, Dad had a crap-load of business sense.

“Hi there.” The receptionist’s voice reached him from her desk.

“Hi. Is he here?” A deep female voice had Jackson cocking his head.

“Wait, which one is this, now?” That sultry voice again.

“It’s Jackson, the third son. He’s twenty-five. From Oregon.” Abby didn’t bother to lower her voice. She must not realize he was just around the corner. Or did she know he was there, and just didn’t care if she appeared professional or not

“So, would you like me to let Jackson know you’re here to see him?”

Jackson set down his cup and moved a few inches to peek around the wall. His jaw dropped.

Tall, maybe just a few inches shorter than his six-feet, two-inches, even in her flat…red high-tops? Different. Her jet-black hair shone in the bright light as it swung thick and straight, cut just at her shoulders. Her jeans clung to her curvy hips and a booty that made him forget to breathe. The graphic printed T-shirt strained at the press of her full breasts against the front of the material.

He ducked back into the kitchen and swallowed, recognizing the heat rushing through his body as blood racing from his head to his groin. Holy hell, she was the best thing he’d seen in this town, by a long shot.

“I was hoping…” Her sexy voice switched to a long sigh. “For one of the business-type brothers, but I was in Kansas City for two weeks setting up new servers for a startup company, and I really need to talk to one of Dusty’s heirs.”

Jackson took another quick look at her. Yeah, she definitely put a rocket in his pocket.

“You should talk to Jackson. He’s a nice guy.”

Ms. Sensual Voice pressed two fingers between her eyebrows. “It can probably wait until next week. Talk to that one, instead.”

Jackson knew he had to make his presence known before the hottie said something that’d make her too embarrassed to go out with him. He grinned. And he would sorely like to take her out. Then take her back home, and spend the night with her. “Because…” Stepping out of the kitchen, he strode toward her, using his sure-hit cowboy gait.

She turned to look at him. Her sky-blue eyes widened and her cheeks pinked up to a sexy shade of embarrassment.

“Our guest thinks this dumb ol’ cowboy don’t have enough gray matter upstairs to understand what she needs.” And what she needed was to have those red lips of her kissed. Hard.

The pain and agony of creating a new story 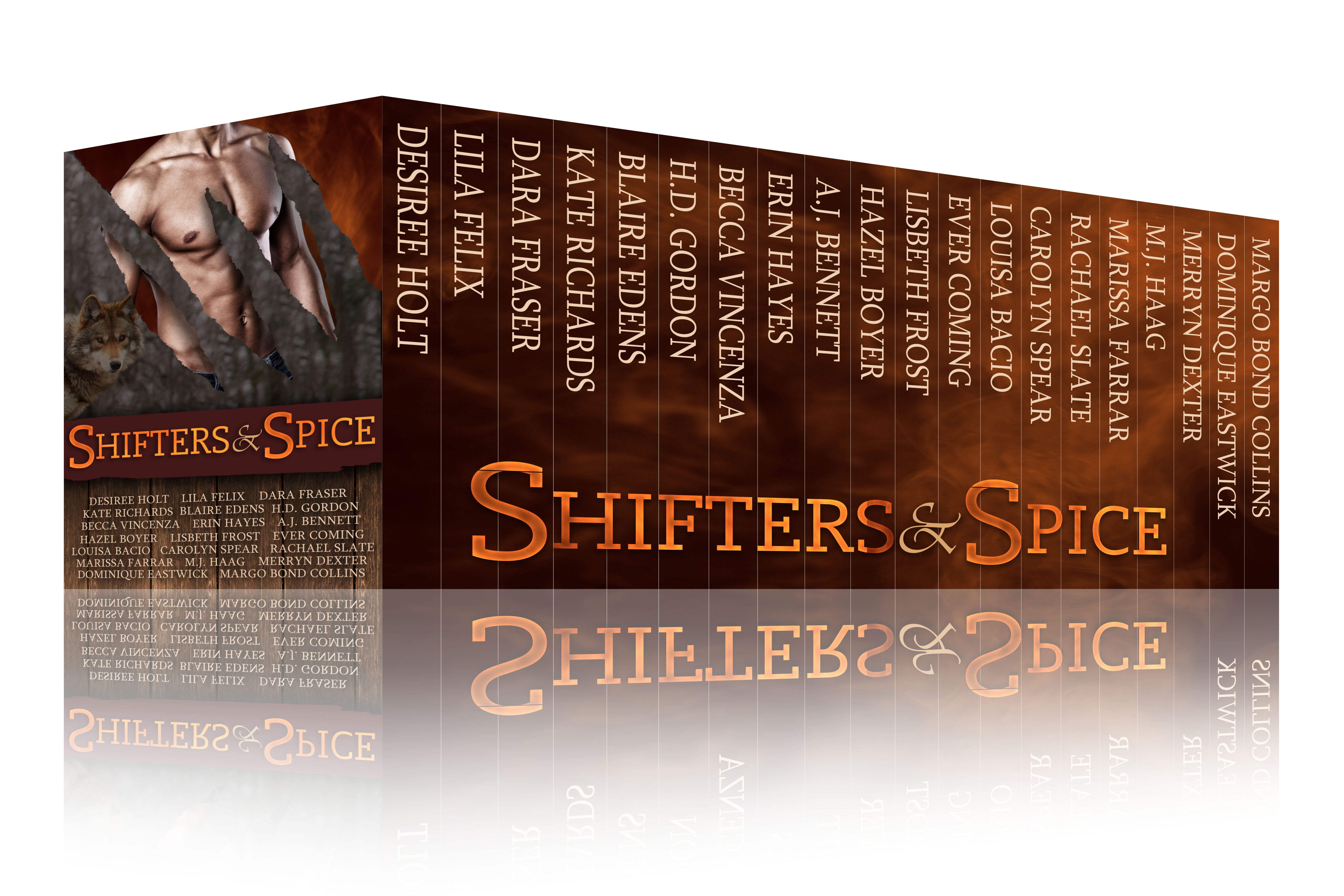 Some hot and spicy shifters just in time for Halloween